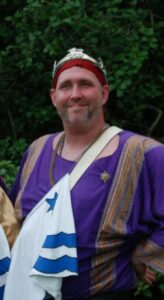 His Majesty, Emperor Ioannes, is a Roman Master of Arms who resides within the Barony of Carillion.

His love of martial activity is almost surpassed by his love of cooking, preferring, at times, to win battles through the art of food instead of the sword.

His Majesty’s pronouns are he/him.
His Majesty is interested in armored fighting and cooking.
His Majesty enjoys puns and other bad jokes. His Majesty has the following food restrictions:
Shellfish, alcohol